It’s time for a Future-Fit Business Benchmark. The reality of planetary boundaries presents one of the most daunting challenges of the twenty-first century. We are damaging the carrying capacity of the planet faster than it can repair itself. We are exceeding planetary boundaries. We are denying our nested interdependencies. For the first time in human history, the future of a healthy resilient human society is in question. This is not sustainable, neither for society nor for business.

No time for incrementalism

Although corporations are not solely responsible for the unfolding environmental and social quagmire, they are among the most impactful actors on Earth. Numerous civil society and governmental efforts over the last quarter century have sought to make corporations more responsible and sustainable. But the movement to transform business practice has fallen far short of what is necessary to avoid dangerous tipping points in climate instability, biodiversity loss, and other threats to ecological and social systems.

Instead of the deep changes needed, we have seen only incremental improvements that lull companies and their stakeholders into a mindset of complacency and denial. Absent is the sense of urgency needed to undergird a shift in strategy and practices commensurate with meeting the needs of nine billion people by mid-century for a healthy and prosperous future on a finite planet.

Sustainability experts are good at describing how a company would perform if it were more sustainable – that is, achieving incremental progress across a spectrum of environmental and social indicators. However, twenty-five years of incrementalism have fallen seriously short of transforming business in ways that align with twenty-first century planetary imperatives.

We need to increase the sense of urgency in the business community so that corporations use their innovation and resources to close the gap between where they are and where they need to be if they aspire to be fit for an uncertain future.

To circumvent the flawed incrementalism that dominates current corporate sustainability discourse, companies need quantifiable, science-based benchmarks for key environmental, social, and governance indicators to illuminate their performance gaps. Without such benchmarks, we will remain stuck in the trap of focusing solely on how to make companies less unsustainable, rather than truly fit for the future.

Investors, customers, employees, directors, and communities want to know if a company is ready to deal with a looming storm of global environmental and social mega-forces such as the ones shown below in the figure from KPMG’s excellent Expect the Unexpected 2012 report. Stakeholders want to know if the business is prepared to mitigate the risks from the impacts of sustainability mega-forces and to capture associated opportunities. 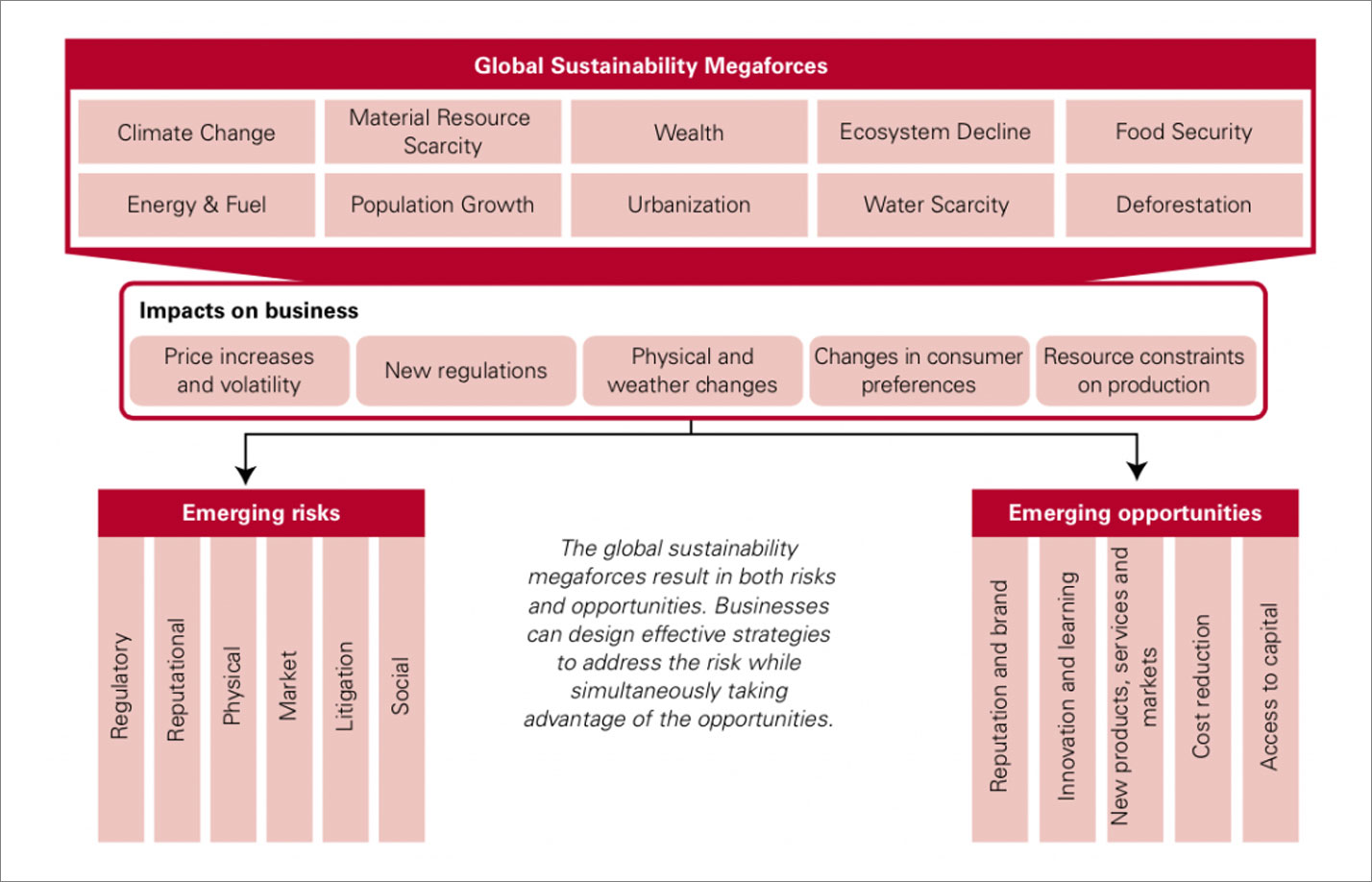 It’s time that companies had a benchmark that tells them when they have achieved that level of performance. They need a rigorous, science-based, and measurable description of a truly sustainable business that has the possibility of thriving both in the near term and in a resource constrained, less unpredictable future.

We’re working on it.

The Future-Fit Business Benchmark defines what level of performance is necessary, based on best-available science. It describes the goal line.

The Future-Fit Business Benchmark collaborative initiative is co-led by The Natural Step Canada and the 3D Investment Foundation. I am one of the partners working on it. Work began in mid-2012 and we will release Version 1.0 as a free, open-source resource in mid-2015. Shortly, we will engage with experts and potential users (companies, investors, raters, consultants) to refine our first public draft.

Bob is a leading expert on quantifying the business value of sustainability strategies.